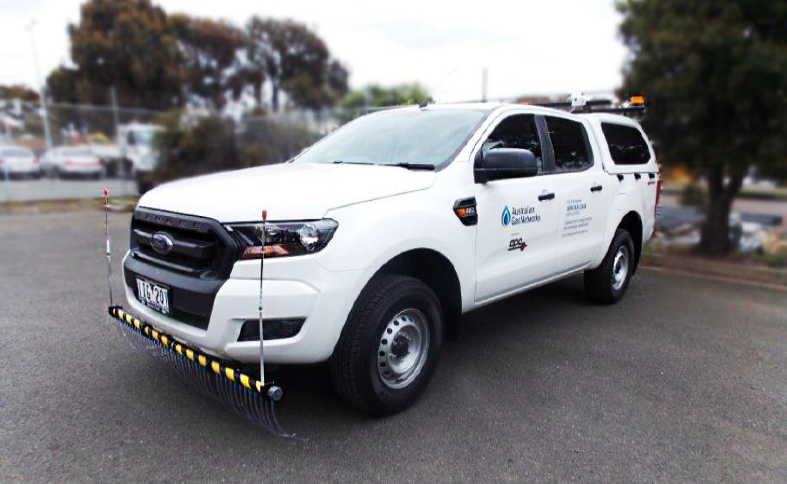 In November this year Comdain’s workshop engineered and installed a gas leak detection device known as SELMA (Street Evaluating Laser Methane Analyser), to an APA leak detection vehicle. Claude Morandin (Comdain) oversaw the attachment of the unit to the vehicle which required ingenuity in order to comply with National Roadworthy certifications. Fitting of the unit to the vehicle has been attempted on previous occasions; however, the modifications required to deem the vehicle roadworthy made it increasingly difficult for APA to find a plausible solution.

SELMA (Street Evaluating Laser Methane Assessment), mounted on cars is a gas leak detector. The main applications of the system are the leak detection on natural gas transport and distributions pipelines, inspections of methane tanks, compressor stations and other potential sources of methane emissions to the atmosphere. The working principle of this methane gas leak detectors is based on a pulsed beam from a diode laser.

The advantages of the system:

The SELMA system consists of two individual units which can be used simultaneously or as one unit depending on user preference:

“We knew the importance of this install and the team worked tirelessly with some very late nights. The benefits of this unit are as important to our client as they are to the general public.”

The leak detection component is mounted on the front bumper of a vehicle, with the pump, laser, mirrors and a laptop mounted in place of the passenger seat. Air sampling is carried out by a number of small plastic vacuum tubes at the front of the vehicle. The air is then filtered between two reflecting mirrors where the laser is emitted and reflected to analyse the gas sample.

Claude soon realised the need to fabricate a custom mounting bracket to the underside of the vehicle for the air sampling component as well as a stand and bracket for the analysing equipment. The bespoke engineering plans were produced as there were no existing drawings or depictions to assist. Once completed, the unit was approved by Anthony Mahoney (APA Projects supervisor); approval was also sought by an external vehicle engineer ensuring the vehicle complied with road laws.

Claude and the team have documented the procedure to streamline future installations. A SELMA representative from Switzerland was flown in to oversee the installation for warranty purposes; he had the utmost praise for Comdain mechanics fitting the unit. Anthony Mahoney from APA has since sent a letter of appreciation, stating:

“This install project was quite complex with tight deadlines, due to the manufacturers engineer arriving in Melbourne for only five days. I would like to thank Claude for his high work ethic, Chris Crljen (Pergam Suisse ag) and the entire Comdain team for all their assistance and hard work.”

APA will now have the opportunity to survey routes at speeds of up 50 km/h, accurately plotting any gas leaks with GPS technology, and able to pick up discrepancies over large distances. This will be a major boost for APA to continuously ensure the integrity of its gas network and ensure public safety.